The ever growing smartphone app Snapchat has another fresh update and we’ve been exploring the new features. Check out the screenshots we got whilst checking out the latest version of the app.

The first thing you will notice is the new chat interface, snapchat have completely redesigned it. You will notice the five options at the bottom which I will tell you more about.

The first icon placed on the far left enables you to send the user you are speaking to an image from your camera roll,

like you could before. This is the first of two features that were already on the app before the update. However it has been moved from the bottom right of the screen to the bottom left and has been given a sleek new icon.

The circle icon in the centre is part of the re design but isn’t home to a new feature. If you want to simply access the camera to take a live video or photo to send to the user you are speaking to, tap on this and it will take you there.

Moving on to the fourth icon. This new feature is similar to the phone feature, however it’s video aswell as audio. Tap on this icon and you will request the user that you are snapchatting for a video call. A bit like on FaceTime. Hold it down, and like the phone icon, it will begin to record a video. One thing we did notice is that this video is always from the front facing camera, we could not get the camera

to face the other way. Once again, if you wish to delete this video, simply drag it into the X in the centre of the screen.

The final new feature on this new Snapchat update is the emoji keyboard. This is similar to the Facebook emoji 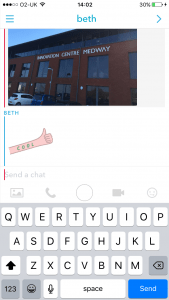 keyboard. There are a range of emoji’s you can send to the user that you’re speaking to. We love this feature as it adds another dimension to your snapchat chat!

Overall this update gets a thumbs up emoji from us. Snapchat’s redesign of the chat has made it not only look better, but more fun to use. The new features aren’t necceserially needed but they are very much welcome. What do you think of the new update? Let us know in the comments section below!