As Facebook has grown and progressed as a site, the concept of live streaming videos to the world became integrated into the features of the site. When paired with software called BeLive TV, the potential for a two way dialogue with the audience and the person live streaming is then possible. We’re taking a look at how the process happens, and how you can pair the two together.
What is Facebook Live?

yourself, in real time, directly onto the Facebook site. This means that anyone who is on your friends list is allowed, as well as anyone who is invited by you. As there are no restrictions on what your video may contain as long as it falls within the Facebook guidelines, people have used the service to showcase fashion, a holiday destination, or to announce a contest or giveaway.

So how does this work with BeLive TV?

While the Facebook live is a good idea on its own, people have also found a way to improve upon it, and this is achieved by using BeLive TV. This adds a whole new level to the live streaming experience. The point of using BeLive is that you can make interviews from anywhere in the world. The software allows for live interviews with anyone who has either a computer or a smartphone. This is very advantageous because you can conduct an interview with someone using this software, and you can then stream it to Facebook for your followers to look at.

There are also other features of the software which make it good for use in interviews. You can show your audience questions on the broadcast, which helps to engage with them, and you can answer these questions thanks to Facebook. If you were conducting a live interview, then you could very easily put forward questions submitted by viewers, in order to maximise the input from followers. As well as this, you can add updates onto the live stream, which can take the form of text or graphics to provide a more comprehensive view of what’s going on.

Overall, using BeLive in conjunction with Facebook allows you to have a much more engaging and visually stimulating experience for your followers than you would usually get. Being able to have a professionally conducted interview with someone who is geographically hundreds of miles from you can be very helpful to a lot of companies. As well as this, being able to put questions from your audience directly to the person you are interviewing means that you can make viewers feel much more useful in terms of contributions. If you’re looking for a way to conduct interviews and then upload them to Facebook while including your audience at the same time then BeLive TV can be a massive help, and will all these features it is easy to see why this is the best possible option for live interviews.

We tried out BeLive TV when the new feature was released! See our first attempt back in April 17 here – http://bit.ly/2vj81ba 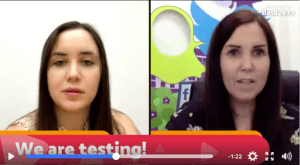 Are you using Facebook LIVE yet? Let us know in the comments below or share a link of your most recent LIVE video 🙂