In December of 2015 Facebook launched a new feature titled Live Video. This feature enables users to film live video from wherever they may be, whether they are taking in some of the tourist attractions in the centre of London or at an event such as a concert or a football match.

The new feature has been welcomed by thousands of users around the world, especially those with a large audience. 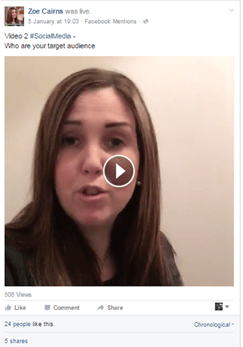 Whilst doing a Live Video, other users can comment in a chat section of the video, enabling viewers to interact with the user who is doing a Live Video. This is perfect for doing things such as Q&A’s. The user can use social media to inform their audience that they are going to be doing a Live Video Q&A at certain time and to tune in. Our very own Zoe Cairns has already made use of the new feature by taking time out of her busy schedule to do a Live Video sharing Social Media tips.

This is a great way to engage with your audience as you are speaking to them directly and can answer questions in the comments section or via video. A big bonus of video is the fact users can see you, so they can see how passionate you are about the topic you are speaking about and can then gain inspiration to go out and do something special.

I personally believe Facebook have launched Live Video as a competitor for Periscope, an app which has a similar formula and has gained over 10 million active users since being launched in March 2015. However I do personally believe Periscope itself followed by Facebook’s Live Video have all jumped into the rapidly growing world of Video Logging (Vlogging) on Youtube. The number of Youtube users creating Vlog’s have grown rapidly in the past few years. For those unaware of what a video log is – it is a 10-15 video posted on Youtube which highlights what a certain person has done throughout their day. It is a lot easier for you to see it for yourself rather than me explain the whole process to you so here are two content 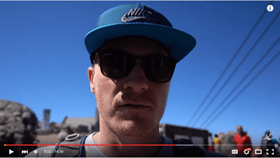 creator’s I would recommend: Mr Ben Brown and Casey Neistat. The beautiful thing about watching vlog’s is that it enables you to see different parts of the world from the comfort of your own home, it will give you inspiration to travel and explore the world. One thing with vloggers is that they are very good role models and share fantastic advice.

This is what I personally believe Facebook’s vision for Live Video is, to enable users to see parts of the world thousands of miles away from them from the comfort of their home, office, etc. Will it become bigger than Periscope and Youtube vlogs? I am not too sure, but with the audience Facebook have, paired with their fantastic ideas, it could possibly be the next big thing. 2016 really is the year video will become a major player in Social Media and I cannot wait to see where we will be this time next year!